Here and there I’ve alluded to my long term project that involves research and planning. It’s the opposite of improv. I think it’s far enough along now I can share it, or at least what I’ve done so far.

An art quilt group I belong to set a map quilt as this year’s challenge, inspired by Valerie Goodwin’s book, “Art Quilt Maps.” I reviewed her book a few years ago. Our quilts are to be no larger than 20 by 20 inches, and no smaller than 12 by 12 inches. I’ve already broken that guideline as my piece is shaping up to be about 20 by 28 inches.

My subject is the Ohio and Erie Canal through Summit County, Ohio. Why? Because the current Towpath Trail that I walk on every week follows the canal’s towpath. Here’s a subway map type rendering of the trail.

The canal was constructed in 1827. Canal building fever struck New York, Pennsylvania, Ohio and other states in the early 1800s as a way to open up the region for trade. The Ohio and Erie Canal was part of a system of connected canals to link the Ohio River with Lake Erie ports. A disastrous flood in 1913 finished off the canal. It had long before been superseded by railroads, but was still used for transporting coal.

I began my project with a map of the towpath and Cuyahoga River, mottled green fabrics and a piece of crinoline. I sewed the green fabrics together for my base on the crinoline, and traced the towpath and river onto separate light green fabric. I dabbed green paint onto that fabric to make it look more like a topographic map. My plan is to embroider over the lines and possibly do some embroidery on the edges to integrate this large piece with the base.

Next, I searched out historic photos of the canal. Luckily the Summit Memory Project and the wonders of Google Images provided some.  As with many historic photos, some have damaged areas, and some were digitized at a very small size – about 1.5 by 3 inches. The photographic skill levels were casual, at best. I persevered and came up with some that showed the canal in operation, stores and businesses along the canal, and the 1913 flood. I also took photos of display maps at the Mustill Store in Akron, and explored the Cascade Locks.

Once I ran the photos through PhotoShop Elements to adjust size and clarity, I had to print them on fabric. I decided to go with black and white as almost all were that way to begin with. The hard part was choosing how to print them. I ended up buying silk organza sheets and inkjet transfer paper.  The organza printed well and will allow me to get a soft translucent quality. The transfer paper, which I chose because I didn’t want a white fabric background, printed well, but I had problems with the heat setting. The paper backing didn’t peel off smoothly and I had to reprint some transfers. Also, the finish is very plastic-y and will be ruined if you put an iron near it. Your iron won’t be in good shape, either. But, I got the natural linen background I wanted.

I played with layout possibilities for months, beginning with paper copies of my photos. I want to show the canal’s history, but don’t want a school poster board effect. The layout has changed since this mockup that combines fabric and paper photos. 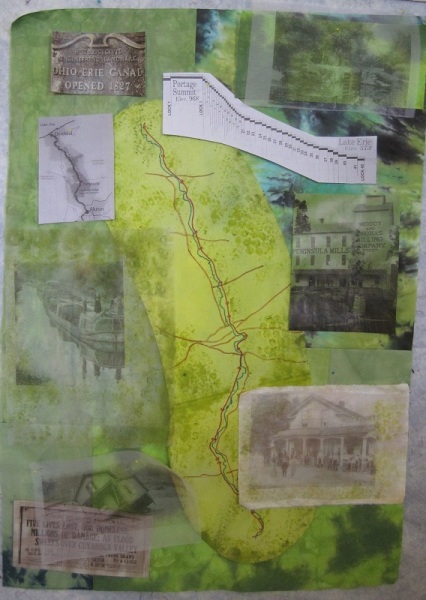 I will work with overlapping fabrics, transparent effects, and embroidery to make it more arty. I plan to have the quilting be the current road network in the map area, and am considering outlining parts of the photos with stitching. After looking at Valerie Goodwin’s latest art quilt maps, I yearn for the ability to laser cut fabric.

I Love to Hear From You Cancel reply

This site uses Akismet to reduce spam. Learn how your comment data is processed.